Defragment Your PC If It's Running Slow

I know, running slow is a bit of a paradox.

If, however, your computer does not automatically and regularly defragment your system, computing may become slower and you may be left with a PC or laptop that always hangs... or takes you back to about five years ago when every program takes decades to load. Haha.

Also note that not all registry cleaners are created the same, and some may actually be slowing you down further. So, check and compare reviews before committing your precious PC to one.
Posted by Mec at 10:46 PM No comments:

LATCH, Inc. (and all other breastfeeding advocacy groups) has been working so hard for the past few months because the breastfeeding Rockstar is coming to Manila this August.

Those who might want to distribute flyers/brochure prints to their clients  can contact the e-mail address in the picture.

To register for the event, just visit the event Breastfeeding Uncovered registration site. Early registrants need only pay P1,100 (as opposed to P1,500 if you buy your tickets at the door on the day of the event).

Intentional parents out there might also want to forward the link to this post or the event page to their pediatricians and other family doctors. The more doctors in other fields to attend, the better breastfeeding support families will get.

The more government leaders to send representatives, also the better.

Getting Anti-Rabies Shots in the Philippines

The funny thing about why I'm writing this post is that my son (2 years old) was not actually bitten by a dog. He was scratched by a stray cat at a park just after I finished telling him and his playmates that if said cat scratches or bites them, they will need shots.

And so, from Tribeca, we headed towards RITM because we couldn't bet on the cat not having rabies, and weren't willing to bring the cat home for observation... lest the cat becomes a pet.

After getting four shots for my son, here are things I now know about getting rabies shots in the Philippines (or in Manila):

1) It is not true that only RITM (Research Institute for Tropical Medicine) and San Lazaro Hospital cater to animal bites and anti-rabies shots. Most big hospitals also do. Even private hospitals also do (at twice or thrice the expense, of course). Here is a link to animal bite centers in the country. You can zoom in to your locality and click the nearest landmarks for contact info. Those in not so urban areas or provinces can also go to the nearest public health clinics to inquire where the nearest animal bite center is.

Why am I mentioning this? Because I thought that (having friends who have told that myth, haha), so we went back to RITM for my son's second and third shot... when we could get the same at PGH!

2) Most government hospitals will only attend to animal bites during weekends and holidays if it's a pediatric case (like in our case, even if it was only a cat scratch) or the bites are in critical locations (like the chest or the face, because these are near vital organs), even if it is a category III bite (except maybe if the animal that bit the person manifested to be rabid, or the injuries are so massive). Most will be asked to return during the animal bite center's operating hours and that varies from center to center. At RITM, it was between 8 AM-4 PM... at PGH, it was between 8 AM-2 PM (with the doctor assessing the bites for first shots going on a break from 10:30 AM to 1:00 PM,  presumably to do rounds and attend to other cases).

3) Therefore, avoid going on Mondays or before/after weekend, holidays if you want everything to be done within 5-10 minutes. Otherwise, it might take you up to two hours to receive your shots.

6) I forgot how much we paid for the initial shots at RITM (that included the tetanus shot) but the 2nd and 3rd cost us P560 (P460 for the vaccine, P50 for the needle, and P50 for out-patient fee). The same shot cost me P500 at PGH. The same shot costs a little more than P1,000 at San Lazaro because you are expected to look for someone else to share the vial with (which I didn't want to do, thank God for our pedia who told me of the anti-rabies unit at PGH). If you're getting the shots at private hospitals though, the entire lot can cost up to P15k... if a health card can cover that, fine, but that's still a sort of debit from your account, so to speak, something you might want to seriously consider if you're sickly (because you CAN get the shots at just around P2-3k in all).

7) Apparently, there is more than one vaccine so you might have to go back to Day 0 if the one initially administered goes out of stock, or if you transfer hospitals/centers.

8) If going to PGH, the main hassle is having to go to the ARU (anti-rabies unit) and then going back near the lobby to pay at the cashier, then going back to the ARU. We got lost twice so I can't help with directions, haha.

9) You must not squeeze dog/cat bites/scratches. That's the old school approach but experts now say that if a dog had rabies, it's still possible for the virus not to enter your bloodstream despite the bite. However, squeezing will rupture vessels and will just facilitate the entry of the virus in your system. The best thing to do is just really clean with soap and water, or even an antiseptic if the bite is huge.... then go and get medical attention.

For more infmation, read more about rabies here.
Posted by Mec at 12:32 AM 26 comments: 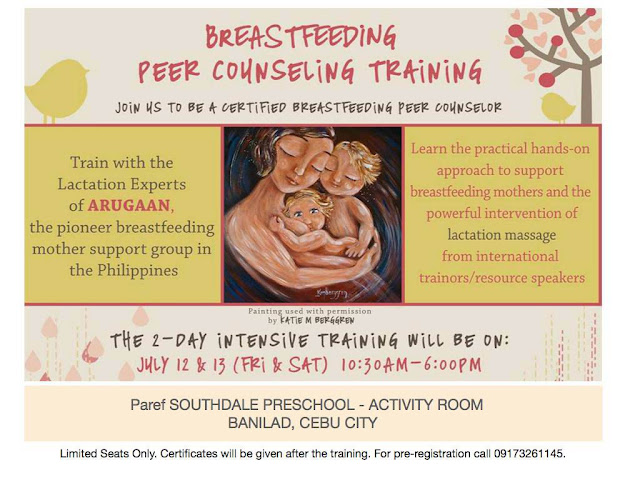 I won't have the right words to describe how much I am indebted to and how greatly I admire the Arugaan lactation experts so suffice it to say, they are very good and very community-based. They are aware of the concerns of families from all walks of life, which makes their approach very practical, realistic and achievable.

So, for those based in Cebu... how about helping breastfeeding advocacy over there by training under these fine people? When I shadowed their training of community health workers, I witnessed people converted and transformed, and I have every hope they will be able to generate the same response there.
Posted by Mec at 11:04 AM No comments:

Careful of those Heels

Lately, it is becoming harder and harder to find decently-heeled shoes at the mall. Usually, what you are offered are elevator shoes where you will be literally required to stand and walk on tiptoe while wearing the pair.

Fashionistas can say all they want to justify the trend but the fact remains that it is unnatural for humans to walk like that, and very unhealthy for the body overall. Which is why, I actually feel for Lady Gaga who constantly trips because of those signature kicks.

To avoid dealing with  recovery from ankle surgery, two inches should be one's limit for shoes they have to wear all day, especially if they will be doing much standing and walking. Some exchange kitten heels for wider heels while others always go for wedges. It may require an inordinate amount of time and patience to find shoes that won't kill your feet (so wear flats when going shopping) but it is an investment in your health.

Please remember, when your bones aren't properly aligned, you are more prone to suffer from headaches as well as gastric problems. And a woman in pain is seldom a pleasant one.
Posted by Mec at 10:45 PM No comments: