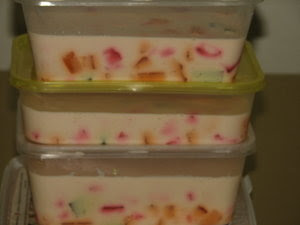 Description:
- got this recipe from Ate Ene, who has already passed away, and I think, after her, am the only one who can give the recipe justice... and this tastes better than the one sold at Goldilock's


(feel free to just use flavored gelatins, but fruit/tangy flavored ones work best with the creamy/milky gelatin; colorful gelatin fillings also look nicer... I have also fallen into the habit of not adding sugar to the Alsa anymore since the creamy part is sweet anyway)

Directions:
* Dissolve sugar and unflavored gelatin in Sprite on a pan. Bring to a boil over medium heat. Mold. Cut into cubes later.

** Boil the pandan leaves in water until flavor has set in. Remove leaves and add the sugar and unflavored gelatin, stirring constantly. Bring to a
boil and mold. Cube later.

*** Dissolve gelatin and sugar in pineapple juice. Bring to a boil while stirring constantly. Mold and cube later.

In a cup, pour the contents of the Knox envelopes. Add SOME boiling water, ENOUGH to dissolve the gelatin. When everything's dissolved, pour the Knox gelatin into the milk-and-cream batter. Mix well. Add in the cubed flavored gelatin. Mix again and then mold for 8 hours in the fridge.
Posted by Mec at 6:06 PM

hahaha, thanks for your comment on my blogpost, i would love to try your recipe i'm so intrigued with the sprite part, sounds yum yum.

dunno how to make one kaya we used to buy form goldilocks lang :D